Behind the Scenes of Performing Arts 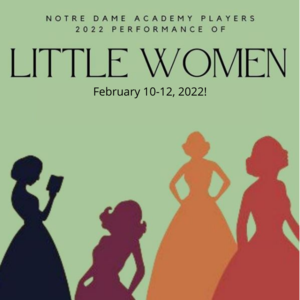 Returning to school in September of 2020 left a lot of questions for the Notre Dame community. “How will we stay safe?”, “What will happen with sports?”, and “How will lesson plans be translated to virtual learning models?” were probably the most pressing questions to be answered. For me, there was just one question lingering in the forefront of my mind: what would happen to our performing arts programs?


While not an actress without her spotlight, I am left a stage manager lacking a set change to call, a crew member without a set to tirelessly fix, an assistant director missing a schedule to compile. The pandemonium of rehearsals and corralling cast members, while a similar parallel, becomes a distraction from the chaos of my own life.


In the two years pre-pandemic, Notre Dame had successfully produced Little Shop of Horrors and Smile The latter of which played its closing show exactly one month prior to schools closing in 2020. Along with our new director, Ms. Ann Marie Nacchio, the high school students presented three sold-out shows for both productions.


But how would the incredibly collaborative process translate into a world of social distancing?


In March of 2021, we received the green light from our administration that a show could be possible. Armed with newfound hope and support from faculty and staff, the cast and crew met to discuss our possibilities, quickly realizing that a full-length production would not be feasible. Isabella Panichi and I, both juniors at the time, took it upon ourselves to write an original musical revue combined with songs from our favorite shows.


Panichi said, “I thoroughly enjoy being a part of such an amazing and accepting community. One that is inclusive and brings other ideas, stories, and characters to life.” While she would never take full credit, it was because of her vision and creativity that the show was brought to life at all.


The task was ambitious, and we were well aware it would not be easy, but Ms. Nacchio’s support and encouragement made it happen. We conducted auditions and writing sessions over zoom, rehearsals, and music lessons on the Library Lawn, which would later become our stage.


Ms. Nacchio, who frequently advances her own talents through writing and recording music of her own, made managing this process look easy. She created a space of creative freedom for all of us, while also fostering connections between cast members and the creative team. Her technical musical abilities were also fully utilized through Watch Party, as we individually recorded and mixed vocal tracks from each cast member.


Reflecting on the experience of Watch Party, Ms. Nacchio said, “The sheer magnitude of an undertaking of this caliber is near astronomical, and the responsibility is placed squarely on the shoulders of every single cast and crew member. They have had to make their own choices and decisions, do their own work and the work of others, and I am immeasurably proud of this fine group of young men and women, and am in awe of what we achieved.”


The cast of 35 worked tirelessly, but it was the crew of students led by Ms. Nacchio that made the show as great as it could be. Abigail White, Emma Scotto, and Billye Albro all filmed and edited performances while we recorded our production at the St. George Theater, and their dedication culminated in a wonderful evening in June.


In discussing their experiences with stage crew, senior Abigail White calls it her passion, while Billye Albro ‘22 credits stage crew for, “The confidence to pursue more artistic endeavors, and helping to make many close friends.”


Continuing with Albro’s sentiment, Emma Scotto ‘22 has felt that being in stage crew has helped her form friendships with peers she never would have met otherwise. The aforementioned seniors are three of my best friends, and their commitment and love for this project radiated throughout the entire production, and I could not be more proud and grateful for them.


While adhering to strict Covid protocols, the cast performed with such passion, symbols of clear relief to be back on stage where they so clearly belong.  Although Covid is far from over, we are proud to announce the NDA Players will be back this February with our production of Little Women.


Dan Zavilowitz, a senior who travels from Monsignor Farrell High School to join our shows, spoke on his time with NDA players, “They give me a place to be authentically myself while learning essential skills to improve my performance levels.” Zavilowitz’s portrayal of “Davey” in our revue was a highlight for the audience, and he was just cast as Mr. Laurence/Rodrigo in Little Women.


Elaborating on Zavilowitz’s words, Brianna Lockwood ‘22, said, “NDA players feels like one big family and I wouldn’t want to spend my time with a more supportive and talented group of people!” Lockwood will be playing the role of Jo March in Little Women. Leading the “Family” of NDA Players will not be an easy feat, but we all are certain Lockwood will rise to the occasion.


There is a strong benefit to being on stage or behind the scenes. Notre Dame Alumna Melissa Holland carries her experiences as Stage Manager to her career in college at St Joseph’s University, working on productions of Pippin and 25th Annual Putnam County Spelling Bee. She thanks stage crew for her fondest NDA memories, and for the importance of dedication and commitment it has taught her.


Victoria Dimino, another NDA stage alum most recently seen as Donna in Watch Party, is down the road at Wagner College following in Ms. Nacchio’s footsteps with her major in Music Education. Like Lockwood, who played her daughter Sophie in the Mamma Mia section of Watch Party, Victoria also saw NDA Players as a second family. She called it, “a great community that I was so lucky to be a part of for all 4 of my years at NDA. Being able to meet and work with such amazing people on and off the stage because of the players was such a blessing, and I know they’re people I will have with me for years to come.”


We have just begun rehearsing for Little Women, and by the infectious joy of the table read alone, it is clear to see this cast will be a welcomed addition to the NDA Players family. As assistant director again this year, and a longtime lover of the book, I am so excited to begin Little Women, which runs from February 10-12, 2022!