Sports in a Pandemic 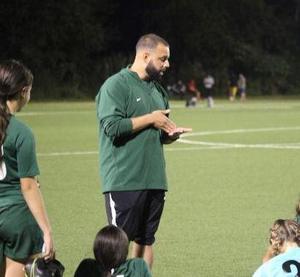 For a year now, we’ve been in the midst of the Covid-19 pandemic. Before the beginning of this school year, there were many questions about our student-athletes and whether or not anyone would be able to have a sports season. While some sports are still up in the air and are questioning if they’ll have a season, six different sports including soccer, tennis, bowling, cross country, swimming, and track and field were able to successfully compete during their respective seasons. In addition to these sports, basketball began open gyms in preparation for a season. This is due, in part, to NDA athletic director Nick Senise, who has many different roles within the NDA community. During the school day, he can be seen teaching sophomores chemistry; outside of school, he is the president of the GCHSAA and oversees 21 different schools within the Archdiocese. He is also Varsity Soccer’s head coach. “The fall and winter sports that were able to compete were successful, and these changes made student-athletes appreciative of the season they were able to have,” said Senise, who also praised the work of the GCHSAA to keep the seasons meaningful despite a significantly lesser amount of games. Additionally, despite the changes to various seasons due to Covid-19, all sports played were able to hold playoffs, which was a major win in Senise’s eyes.

“To play without something to win for is demoralizing for athletes, so to find a way to be able to have some kind of playoff and championship made the sports seasons we had a good one, despite Covid-19,” said Senise. On the weekend of March 13th, the Varsity Swim team was able to have their first meet

However, behind every great athletic director is a supportive community. Seeing the many different roles Senise holds in both the NDA and sports community, he highlighted the importance of various groups of people who helped get sports off the ground at the beginning of the year, including school leaders Ms. Jaenicke and Ms. Amato, our president and principal, respectively.

“Big thank you to Ms. Jaenicke and Ms. Amato for the support they provided me by giving me some insight to help make decisions for the GCHSAA as a whole, not just for NDA’s sports teams,” said Senise.  Furthermore, without the support of coaches, parents, and our student-athletes, the fall and winter sports seasons would not have run as smoothly as they did. Mr. Senise in one of his many roles at NDA: coaching Varsity Soccer

“Thank you to our coaches who supported and enforced all our endeavors to keep our student-athletes safe, our parents who trusted us and had their kids’ best interests at heart when trying to have a memorable season, and finally our student-athletes who followed all the protocols and did what they had to do to play,” said Senise.

In spite of the fact that there was no such thing as a “normal season” this year, our players definitely made the best of the situation. They followed the rules in order to play, which allowed numerous teams to play a season unlike any other. Furthermore, those who aren’t yet able to play have been working hard in the hopes a season will happen. Freshman Caitlin Sweeney has been attending various basketball workouts since November, and they have all been of great benefit to her both physically and mentally.

“The basketball workouts definitely weren’t what I was expecting for my freshman year, but all things considered they’ve been great,” said Sweeney. “We do as much as we can under the guidelines, and they help me both keep in shape and stay fresh in case we can have a season. It also gives me something to do and keep busy, which is always great.” “It was pretty different playing this season,” said DiFalco. “Obviously, we took precautions every game and practice by wearing our masks and getting temperature checks. We also didn’t have as many matches this season, but we made the best of it and had so much fun as a team.”

However, despite all of the changes this year, many teams won championships and top seeds in their respective sports. JV Soccer won the top seed in the West Division and played in the Archdiocesan championship in November. Additionally, the “B” Bowling team won their championship game against Monsignor Farrell on February 23rd, and “A” team senior Nicole Rourke won the girls’ individuals two days later. Finally, the Indoor Track & Field relay team comprised of seniors Giavanna Comerford and Aileen Hoban, junior Saranda Capani, and sophomore Lola Dinneen, posted the No. 1 SMR time in the country and took first place February 13th in the sprint medley relay at the CHSAA New Balance Grand Prix. Very impressive! Finally, there is still more to come with NDA’s sports teams. Softball and golf are allowed to start tryouts and practice on April 17th, along with outdoor track and field. There are also numerous sports that could still potentially have a season, including basketball, cheerleading, and volleyball. Good luck to our Gators during this difficult time, and we can’t wait to see you back doing the sports you love!