Sports are Back and Better Than Ever 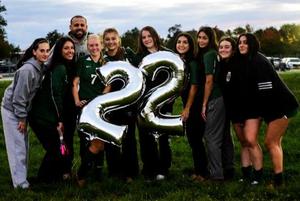 At Notre Dame Academy, our sports community is one of the most acclaimed throughout the school. With many restrictions in place last year due to Covid-19, including shortened seasons and less competitive play, our Gators “chomped” at the new sports season and all it had to offer.

About two months ago, our Fall sports teams (JV/Vars Soccer, Tennis, JV/Vars Volleyball, and Cross Country) began practices and started play shortly after. Many successes were experienced throughout the various teams, and although the Fall season is starting to come to an end, this is only the start for our Athletics program in the 2021-2022 season.

Varsity Soccer had a rough start to their season due to the number of various injuries throughout the team. Coached by Athletic Director/Chemistry teacher Nick Senise, the team ended their regular season with a 6-5 record. Perhaps the most suspenseful game they had was their Senior Night on October 18th, where the team overcame a 1-0 deficit in the first half to win 3-2 against Maria Regina. Sophomore Ella Cipriani had all three goals.

“It feels great to be back,” said Cipriani. “Being able to play a normal season with my teammates was the best feeling, and I’m so proud of what we were able to accomplish.”

JV Soccer took off from the start of their season and finished second in the league with a 5-4-1 record. They defeated St. Joseph Hill on October 13th with a 2-1 win, with goals scored by freshmen Anna Tutrone and Renae Russo. Additionally, they both tied and won against St. Joseph by-the-Sea on September 29th and October 14th, respectively. They are coached by Erica Bettini and Notre Dame alumna Erika Durkin (‘15).

Varsity Tennis recently completed their season with a 4-7 record, recording a 3-2 win against St. Joseph by-the-Sea both September 30th and October 14th.

Varsity Volleyball nearly had an undefeated season, with both teams going 9-1 in the regular season. Their only loss came from the hands of St. Joseph Hill, a 0-3 defeat on October 8th. Varsity tied for the Island Championship against the Hilltoppers but fell to the second seed after being defeated 3-1. They then made it to the Tier 2 South Championship against Hill but lost on a 3-0 sweep. However, the final score did not represent how hard our Gators fought, with the team only losing 25-23 and 27-25 in the final two sets. Seniors Brooke Manning, Jenna Sagaria, and captain Brooke Lavelle led the way in their final game and were coached by Brian Fourman and assistants Steve Caruso and Mike Donadio.

“After not being able to have a season last year, it felt great to play one more time for NDA,” said captain Brooke Lavelle. “There’s nothing better than playing with my friends, and finishing with a 9-3 record just shows how well we played together.”

JV Volleyball completed their season with a 4-6 record. Two of their wins came from Moore Catholic, with the team beating the Mavericks 2-0 on both September 20th and October 14th. They are coached by Social Studies department head Donna Bellocchio.

NDA’s Cross Country team experienced major accomplishments during their season, led by coach Youree Garcia. Three of our Gators made the top four of the CHSAA girls’ cross country city championships, with junior Lola Dinneen taking top honors and edging out Hill’s Ava Gumb with a time of 15:19. Seniors Alyssia Brown and Meghan Leonard rounded out the top four with times of 15:36 and 16:22, respectively. The team finished third in the city championships and were expected to make a strong showing at the CHSAA Intersectional Championships, which took place on November 13th.

Furthermore, the aforementioned teammates placed second, third, and fourth respectively at the inaugural Edward JJ Bowes Invitational on October 23rd, propelling the Gators to a second-place finish behind St. Francis Prep. Finally, freshman Jordan Moore earned the first title of her high school career at the CHSAA Freshmen Cross-Country Island Championships. She finished with a time of 10.29.7, winning with 37 seconds to spare. The Gators went on to win the team title with a perfect score of 15 points.

At the Intersectional Championships on November 13th, Dinneen continued to turn heads when she won the Cross Country championship with a time of 15 minutes, 6.5 seconds. She again edged out Hill’s Ava Gumb, who finished 8.5 seconds behind her. Seniors Brown and Leonard also finished in third and fourth place with times of 15:57.4 and 16:25.3, respectively. These efforts were enough to qualify the team for the New York State Federation championships, which will take place on November 20th.

When one season ends, another one is just beginning. Following the success of our Fall sports, our Winter sports are gearing up to start. Some of these programs, such as Cheerleading and Basketball, have not performed or played since March 2020; however, this means nothing, as they’re now back and better than ever.

Our Varsity Cheer team won their first competition in 21 months, earning top honors in both their division and winning the Grand Champion title at the Warren Mills Cheer Challenge. The Basketball program recently concluded their tryouts and are now preparing to commence play in a month. The program, which recently experienced a shift in leadership from former Head Varsity coach Lou Terrusa to former JV coach Bobby DellaValle, has been holding Open Gyms since September. DellaValle will be making his varsity debut alongside his JV assistants Steve Benigno and Notre Dame alumna Haley Fitzpatrick ‘15. The JV will be coached by alumna Kasey Althoff ‘15, who will be assisted by former St. Peter’s and College of Staten Island hoopster Andrew Kartalis.

We look forward to seeing the success of our Winter sports and congratulate the Fall sports for all their success. In all Notre Dame Academy offers to its students, it’s clear that our sports teams are unmatched to any other school on Staten Island. Despite having seasons abridged and canceled last year due to the pandemic, our teams have, above all, brought the normalcy back to our school. Sports are back and better than ever, and we wish our Gators luck as a new season begins. Our Soccer seniors celebrated their Senior Day on October 18th, and won 3-2 against Maria Regina. Photo by Annie DeBiase Sophomore Ella Cipriani has led the Gators in scoring throughout the season. Photo by Annie DeBiase. Senior Brooke Lavelle has been a top player for the Varsity Volleyball team after last year’s season was canceled due to Covid-19.