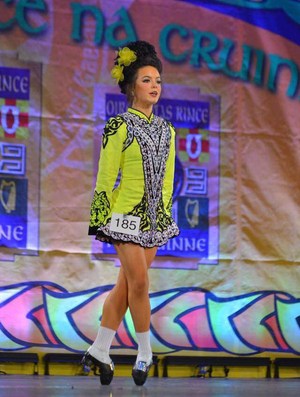 Caitlin Therese Ward is no stranger to the Great Irish Fair. Since she was a young girl, her family attended the annual event and even designated it as a time for reunions.

“It was just a big part of our family,” said Caitlin during the kick-off event at St. Francis College in Brooklyn Heights, Aug. 24.

Except the difference this year is that she will experience the annual event as the 2017 Colleen Queen.

“It’s definitely special this year,” she added, “because now I’m a part of it rather than just going and visiting it.”

One could say it was only natural for this 17-year-old to be chosen as queen, seeing that she was always someone who showcased her love and pride for her Irish culture since the day her legs could move to the rhythm of a jig, reel or hornpipe.

A champion Irish step dancer, once she steps onto a stage, audiences see first-hand the amount of dedication it takes to perfect her skills. Her natural display of gracefulness, finesse and confidence earned numerous awards such as being a World Championship medal holder for the 2012, 2013 and 2017 years.

“I just took on a whole other world from it,” she said. “Traveling from London to California, back and forth, all over the world. But it has been great because you get to meet so many friends and you get to see so many other people from everywhere.”

Born in Brooklyn and raised in Staten Island, she is the second of two children born to Paul and Eileen Ward. She has an older brother, whom she refers to as her best friend, Kevin Ward, 20. Her heritage traces back to County Laghey, Ardara and Barnesmore Gap County, respectively, and Tuamgraney and Dungloe County.

Caitlin attended elementary and middle school at St. Christopher’s and she is a senior at Notre Dame Academy, both in Staten Island.

Caitlin’s mom, Eileen Ward, also took up Irish dancing as a young girl, at the advice of her late-grandfather, Peter Tuohy, who wanted her to be exposed to her ethnic roots.

“My father used to have an Irish import store in Bay Ridge,” said Eileen. “So when I was 13, I used to sell products for him. He was very involved in the Irish community in Brooklyn. So to have my daughter, his granddaughter, come back now and come full circle with her representing young Irish women in Brooklyn at the Fair is an honor.

“And to be amongst wonderful honorees and the Irish American Building Society … they’re just doing wonderful things for the community, so it’s exciting. It’s all coming full circle.”

But more than what meets the eye, Caitlin’s appreciation for her culture even takes center stage in her every day life, expressing it as much as she can with her friends through native Irish music and the magic of her Nana’s cooking.

“We got soda bread ‘Nana’ would make, they always like that,” she said. “…Her soda bread is to die for. And the potatoes, of course. Always got to have potatoes.”

Theresa Tuohy, or ‘Nana’ as Caitlin calls her, arrived in Brooklyn from Dungloe, County Donegal, Ireland, at the age of 18. Caitlin credits her grandmother’s strong Catholic faith as the inspiration for her and her family.

“She’s just a good component for leading the way of staying to our Catholic roots,” she said. “She’s the one who keeps us pushing and staying there every Sunday, so it’s great.”

When Caitlin’s not showcasing her talents in her beautiful Celtic designed-costumes all over the world, or spending time with the family she holds near and dear to her heart, she’s also involved with her community.

Caitlin is a member of the Irish-American Society of Nassau, Suffolk and Queens in Mineola. She even gets to “let loose and hang out and have fun” when she plays the position of point guard for her CYO basketball team at St. Christopher’s. Last year, she was a lifeguard and a camp counselor.

After years of giving her all in showmanship and service, Caitlin plans to focus her career in a field that will help others. After high school and college, she plans to go into occupational therapy.

Even though she may have to hang up her dancing shoes, she will always remember the day she graced the stage as a queen, with her favorite support team right beside her.

“It’s good that our whole family is always sticking together, expressing the faith and the Irish culture,” she said.

“So I hope when I one day have kids, that my kids are going to be dancing away whenever they wake up. And when their friends ask them what it’s like to be an Irish person, it’s simple: It’s never needy. It’s about just being together, sticking together through anything and everything.”