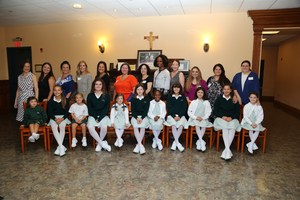 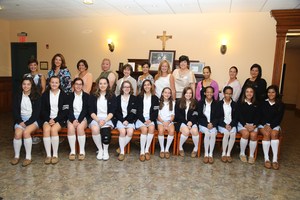 Over 40 alumnae who are current parents of NDA were celebrated at the First Annual Legacy Breakfast. This marks the start of a wonderful tradition!
Written by Charista S. Mroczek
STATEN ISLAND, N.Y. -- This year was an important one for Notre Dame Academy elementary and high school alumnae. Why? Because they hosted their first-ever Legacy Breakfast.
NDA has educated young women on Staten Island for the past 114 years. The support of alumnae and parents is vital to the advancement of their mission. NDA alumnae are responsible for the preservation over time of memories, stories and priceless pictures of years passed. So this year, NDA decided to start a new tradition.
To start off the beginning of the school year, NDA hosted their first annual Legacy Breakfast to acknowledge current parents who also attended and graduated from NDA. Over 40 current parents are alumnae and were celebrated this year at the Legacy Breakfast.
When asked about the significance of the event, Killian Clifford, an alumna and the Director of Mission Advancement, stated: "When you think of Notre Dame, you think of family and tradition--daughters following in their mother's footsteps, grandmothers and granddaughters reminiscing about life on Grymes Hill, sisters sharing this same experience, and friends that become sisters. We hope to make the Legacy Breakfast a new tradition that celebrates mothers and their daughters and the special relationship they share with Notre Dame."
One of the alumnae who was recognized as a current parent is NDA High School Principal, Kate Jaenicke (Class of 1987).
"What a blessing it is to serve as principal of the school I attended 30 years ago and to share that experience with my two daughters," Jaenicke said. "The education they received has been the best blessing of all. I am grateful to the many teachers -- several of whom are alumnae too! -- who helped to shape my two daughters and three nieces into young women of courage and conviction.
After enjoying the breakfast portion of the event, alumnae were surprised with a visit from their daughters at NDA from ages 4-17. Even the youngest daughters in the Pre-K 3 Program were walked across campus to participate and take photos with their moms.
"My mother and I thoroughly enjoyed the legacy breakfast. It was really special to connect with other families who also have spent generations at NDA. Seeing myself and my mother among so many NDA girls made me appreciate the opportunity Notre Dame has given us to become the best version of ourselves, and I love that so many of us can share that with our moms," shared Leila Pollio, high school senior.
High school freshman Rowan Fosella added,"I have wanted to go to Notre Dame since the time I could speak. My family has had a connection to NDA for close to 100 years. My great-grandmother, my grandmother, and my mother are all graduates of NDA. So to be at the legacy breakfast with my classmates and their moms was a blessing to me."
Each alumna was then presented with a pin to mark the occasion a token they can wear to all future NDA events. This pin was beautifully designed to resemble the embellishment on the class ring the alumnae received when they were students of the school. Afterwards, alumnae were invited to participate in the NDA Back to School Mass and process in with their daughter.
"The Legacy Breakfast was a fun time for my mom and I to compare our days at NDA and share mass together. The fact that she walked the same hallways during her high school education is really amazing. There is even something special to attending NDA though - something you can't really put into words - but something my mom and I understand and will always share," said Rosemary O'Neill, high school sophomore.
High school senior Michelle Petrocelli added, "I have fully enjoyed my years at here at NDA. Being part of the first Legacy Breakfast was an honor. It will be something I will always remember sharing with my mom - and hopefully someday with a daughter of my own."
http://www.silive.com/charista/2017/11/nda_hosts_first_annual_legacy.html#incart_river_mobileshort_index Source: SI Live