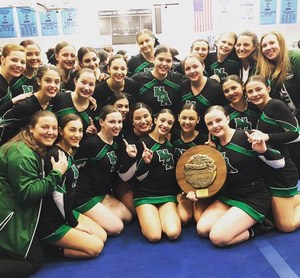 Congratulations, Gators on securing your first CHSAA New York State Cheerleading Championship crown!
Notre Dame Academy captured the first-ever CHSAA Cheerleading Championship crown Saturday at the College of Staten Island.
NDA was followed by St. Joseph by-the-Sea and Kellenberg Memorial HS.
"It was a team effort. The girls made a promise to leave their hearts on the mat and that's exactly what they did," said Gators coach Andrea Vindigni.
Seniors Emily Garcia, Emily Loughlin, Delia Pellettiere, Sydney Stein and Hope Tulino led NDA to victory.
"The five seniors really did an unbelievable job of keeping their team motivated and encouraging them," Vindigni added. "This was the closing of our season, which is why it was such a special win."
http://highschoolsports.silive.com/news/article/-949756025616660651/notre-dame-academy-notches-first-chsaa-new-york-state-cheerleading-championship-crown/ Source: SI LIVE