Congratulations, Back to Back NYCGCHSAA Champions! 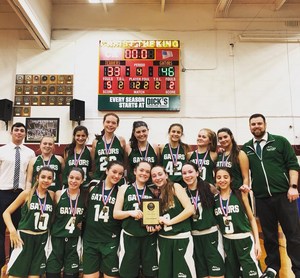 Congratulations are in order for our JV Basketball team! Click the headline for more information...
HS girls' basketball: NDA's JV does it again ... wins CHSAA city championship (By Charlie De Biase Jr.)
Notre Dame Academy was victorious for the second time in three days as it ended its season with a 46-33 victory over St. Francis Prep in the CHSAA junior varsity city championship game Tuesday at Christ the King HS in Queens.
The Gators, who defeated Maria Regina for the Archdiocesan title on Saturday, ended the season with a 24-1 mark.
Kristin Tuohy led the way for the Gators, finishing with 19 points, including nine during the fourth quarter.
Julia Maida and Casey Love added eight points apiece while Olivia Ferris turned in a superb effort defensively for NDA.
"Again, the defense was the key to this (victory),'' said NDA coach Bobby DellaValle, who led the Gators to the city title for the second year in a row. "We came into the game looking to avenge our only loss of the season, which was against Prep.
"The girls played really tough all game, especially when things got tight. They dug down deep and brought out heart and smart play when they needed it most.''
http://highschoolsports.silive.com/news/article/-1838434836485210001/hs-girls-basketball-ndas-jv-does-it-again-wins-chsaa-city-championship/ Source: SI Live